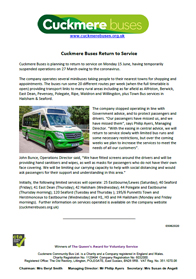 The Parish is split by the A27 trunk road, with Berwick Village and Lower Berwick sitting within the boundary of the South Downs National Park.

Berwick Station is a main line railway station with regular train services to London and stations on the South Coast, car parking is available.

There is a community bus service, the Cuckmere Community Bus, which serves the outlying villages and links with the local towns of Hailsham, Seaford and Eastbourne. Operated by volunteer drivers it is also available for private hire.

Berwick parish has a number of amenities and attractions that are accessible from the A27 trunk road, the community bus service, the railway station and the Berwick Way footpath.

There is the Church, with the well known murals by the Bloomsbury set, and the Cricketers Arms in Berwick village, Drusillas Zoo Park and The English Wine Centre in Lower Berwick.

At Berwick Station you will find a general store with butchers and florist, a post office, The Berwick Inn, a village hall, a playing field and a Service Station

There is an annual flower and produce show held on the Saturday of the August bank holiday weekend at the playing field. At the show villagers display their home grown fruit and vegetables, preserves, cakes and handicrafts. There are stalls and exhibits on show. Refreshments are available in the village hall

The South Downs National Park has been established since 1stApril 2010, Berwick Village and Lower Berwick are within the boundary of the Park with the southern verge of the A27 being the boundary.

The Berwick Way is a footpath which was intended to connect the three parts of the Parish, the project was taken over by ESCC and made into a cycleway which would attract some funding. But, as is the way with these projects, the funding came to an end before the footpath. The Parish Council is committed to seeking ways of completing the project to safely link the three parts of the Parish together and to improve accessibility to the South Downs National Park

There are many other footpaths within the Parish linking it to local villages and providing views of the South Downs and surrounding countryside. Paths from Berwick Village and Lower Berwick link into the South Downs Way. The Vanguard Way, a 66mile route from London also runs through Berwick Station and continues until Newhaven.

The nearby reservoir at Arlington is easily reached from paths behind the garage or from the road that passes through Berwick Station, where car parking is available. A nature reserve, it is a haven for birds and wildlife. Nightingales are regularly heard throughout Berwick Station. Arlington Reservoir is also popular for trout fishing .