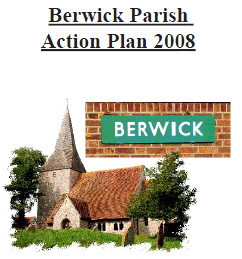 Parish Action Plans are intended as a means for villages to express the needs of their local communities to their District and County Councils. The Berwick Parish Action Plan was launched on 28 September 2007 at a meeting in the Village Hall at which residents contributed their suggestions. Based on these topics, the residents’ steering group then formulated a questionnaire which was distributed to each of the 104 households in the Parish. 94 responses were received which were then carefully assessed to arrive at the views and statistics of the Action Plan.

The Plan was published and then formally adopted in May 2008 by Berwick Parish Council which committed to progress the Actions recommended. Copies of the Plan were given to every household in the Parish; to the Chief Executive of Wealden District Council and to its Director of Environmental Services; to the Chief Executive of East Sussex County Council and to its Transport and Environmental Department.